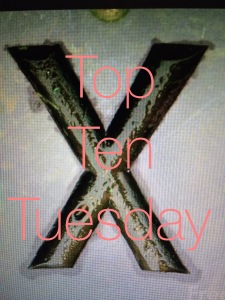 Every now and again, we have one experience that is either awful or wonderful, and then have a completely opposite experience the second time.  I’ve had that several times of flipping my opinion of something pretty suddenly, and this Top Ten Tuesday is going to focus on that.

1. The book The Poisonwood Bible.  I was so into it when I first read it, but not the second time.  I don’t even think I finished it again.

2. The book The Thornbirds. Same thing.

3. I remember watching, I think, the movie The Rainmaker three times in a row because it took me that long to finally get it. Then when I did, I thought it was stupid.

4. The song Tonight, Tonight by The Smashing Pumpkins.  I didn’t really like Smashing Pumpkins too much, and this song really got on my nerves.  Then, I was in someone’s car and it came over the radio. Something about that time hearing it was different and when it landed on the last chord, I was like, “Oh my gosh, I love that song!” I still love it.

5. When I came out of the coma, I liked tomatoes, which I hated before, but I didn’t think Leonardo DiCaprio was cute anymore.

6. The book, She’s Come Undone. When I first read it, I thought it was gripping, though hard to read. The second time I tried, I wasn’t as into it, and it made me so uncomfortable that I gave up on it.

7. Show choir.  This may not quite fit, but I was not involved with choir or singing in any way in high school. Then, one day my junior year, I got a burr up my ass to try out for show choir.  I have no idea why. I did audition, got it, and had a great time.

Okay. It’s only seven; sorry. Has this ever happened to you? With what?

In response to The Daily Post’s writing prompt: “Night and Day.”