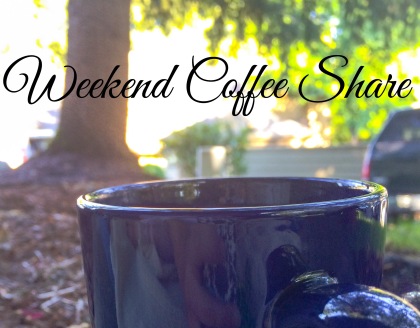 If we were having coffee, you wouldn’t have sat down before you asked me about the craft fair I did on Thursday. Oh Lord, I begin. What an experience. In your haste, you drop a large bit of coffee cake on your lap and have to run over to get a napkin. But you gesture for me to keep going, and I tell you about how small I felt when I first got there.

The tables were all the same size, but they were all decorated and looked huge. There were displays with cloths hanging off of them, and arrangements set up in the front of the tables. I just had a small selection of crocheted coffee sleeves with a few fingerless gloves. I did have a sign I drew and looks pretty cool, and you say something encouraging to that and ask if I sold anything. I sold enough to make up the price of the table and $5 more.  That’s a good thing! you say encouragingly, and ask me if I’m going to do another one. I’m not sure, I say, though I learned a lot in this experience, so if I do, I’ll be better prepared.

If we were having coffee, I would tell you about the girl who was at the table next to me, Rachel – really cool with awesome hair. It was a little dreaded and went down to her waist. She was easy to talk to and invited me to another fair she’s hosting at her ballet studio next weekend.

She had a number of different items she was selling, not just one thing, which gave me the idea that I could sell an assortment of things I made. Are there other things you want to make? You ask me. I talk about the sign I had made; I had included some Zendoodle-inspired drawings around the letters, and I had been thinking about doing some drawings to sell. I told Rachel as much, and she suggested drawing them on cards to sell so then people can either buy them to give or to frame. You agree that was very cool of her. I ordered some plain cards on Amazon that night.  You’ll have to make me something! you insist, and I promise I will.

Oh, and another thing! I tell you that an article I wrote for SheKnows was run, and that was exciting. Now I have earned the Experts Among Us badge on my blog. 🙂 It was a week of doing new things, and its good.

If we were having coffee, I would tell you about the playdate I had at my house yesterday. I have friends in Washington! I say excitedly. And our apartment is so clean. Not only did I vacuum, Cohiba and I got things really cleaned and thing put in places, so kind of organized.  It’ll look better once we get the furniture we’re planning to get (once the reimbursement check comes from the move) but it is so much better.I also went to a holiday thing with some other mom friends, and went into the trenches with them as one of the babies threw up on her mom. We all worked together to clean up our friend and monitor the other babies – it was fun.

This was a wonderful week of new things, and its good.

Sometimes I find myself stuck in the car while the Wee One sleeps – nap trapped, I call it. I have recently begun a new style of drawing and am able to make some hay while the nap-sun is shining: through Zentangles.