10 years ago, my best friend gave me a beautiful gold and red journal that is almost sacred to me, so I don’t like writing just any old stuff in it.  The first time I traveled solo, I took it with me to write about the adventure, and I’ve taken it on every trip since.  Something I haven’t done before on this blog is to pull from those pages, share with you the things I thought, felt, experienced from my various trips, but today, thanks to a prompt about travel writing, I’m going to share one of them

Backstory: I have been part of the travel community Couchsurfing since 2007, and have made many friends all over the world on this site. (It has deteriorated severely since going public and becoming for-profit not long ago, but that’s a story for another time.) In 2009, the fine CSers of Krakow were hosting a couch crash, a several-day series of events and celebrations in one particular city. It’s just an excuse to travel, have fun, get to know cool CSers and a different city in a way you normally wouldn’t. My friend Denise was going to be passing Krakow for it, and, on a lark, I decided to meet her there. These are my notes from that trip. (This post is long, but worth it.):

Is there anything more delicious than the first shower after a few days? I think not.

A full day in Krakow and it was good. It was sooo good to see Arthur again. He took me to his impossibly tiny room he shares with Ignus, from Lithuania, and we shared a shot of Polish cherry vodka, welcoming me here. We were relatively aimless most of the day, talking about possibilities for the next week and reliving past memories. The exchange rate is fantastic and we popped into a milk bar and ate a lot on the cheap! We tried to meet Denise and Danny at the train station (I actually fell asleep on the bench there) but missed them.  We’ll get them later.

A woman on the tram today shushed me – I was being too loud. Is that a woman thing (social expectations) or an overall cultural thing? Unknown.

We walked back to the old town square and had some coffee and a beautiful fruit salad. We then had gelato, mint cones, and heard the trumpet player (from the belfry of St. Mary’s church). Arthur said that someone comes out to play, but always stops somewhere in the song, at different places.  This is to honor the horn player that warned people about an impending invasion (by the Turks?)  and was speared in the throat with an arrow. Because of him, the Poles got away safely. (Full story)

There are lots of little commemorative things like that around here – statues and pictures, little ceremonies like the trumpet. There are so many pigeons around here. The country is mostly Catholic (like 95%) and every 30 minutes or so, we walk past someone in the nun/priest regalia. That, combined with the architecture and the swirling pigeons make quite a picture.

I’ve been thinking about that woman shushing me.  The contrary side of me wants to ignore it, but I don’t want to be an “Ugly American.” I want to keep with the customs here.

And speaking of customs here, when Arthur and I were on the tram today, I saw a young chap give up his seat for an elderly woman.  I know that isn’t specific to Poland, but it was nice to see.

Danny (a British ex-pat CSer living in Prague that Denise was traveling with), Denise and I are on the bus to Auschwitz. We’re finally out of the city and into the countryside, more of it. Homes are build into the hills and have decade old trees around them, and laundry drying on lines in the front yard – it’s like everyone dries their clothes outside!  The architecture is fun, with surprising features on the houses.  They looked lived in, with the laundry and gardens and dirt driveways. There’s a goat or two in the background. Many of the homes out here have little statues of Jesus or Mary in their front yard.

This country has seen so much – invasions, war, domination, the Pope (John Paul II was a Krakovian). I have an awe-filled healthy respect. 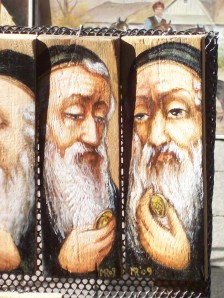 Another interesting thing Arthur told me is that anti-Semitism is still alive and well. He said the superstitions was (and still is) that it’s good lock to have a picture of a Jew in the house, and if there’s a lemon in the picture or they’re counting money, it’s even better.

Auschwitz. That can never happen again.

Last night was awesome, meeting other CSers and ambling around the square. It’s raining a bit today and I’m glad for my (rain) gear. I was supposed to meet with Danny, but we only crossed paths on the circle around the Planty. Originally, the Planty had been a moat around the old city, and, as the city developed, it was drained. Left alone, it became a malaria-filled cesspool and so was filled in and made the garden and path that it is today. So many birds around here.

I went into St. Mary’s church, got the student rate, and the inside was so gorgeous that I paid the 5 zwoty to take pictures. Afterwards, I went back to Arthur’s apartment at went to a tavern with him and our new friends Marek and Vita. There was a speed-dating get-to-know-you thing at first that I thought would be stupid but was actually a lot of fun – more fun than I anticipated. I danced a lot. I got drunker than I have been in awhile, and I think that’s my big drunk for the trip.

We woke up slowly, hung over and tired. We showered and prepared food for the picnic we were going to have with other CSers. As we walked to the picnic spot, I realized I had a splinter in my heel from dancing barefoot the night before. Boo. We walked to the wrong picnic location at first, but we finally found it. It was in a cluster of buildings that Arthur said were very characteristic of communistic construction. They were dorm-like buildings with square windows and drab colors. We found CSers assembling in an odd area, kind of in a corner of the courtyard that would be strewn with broken glass and cigarette butts.

(Later, written on a ledge in the shadow of St. Mary’s.) The picnic was a lot of fun. There were a lot of us and the sun was setting – it was warm and very party-like.

One guy had brought a slack line that people were playing on, and another organized school yard games.

I began chatting in earnest with a specific group of people and we stayed together for the rest of the day, the rest of the trip, actually. It was a wonderful afternoon.

Agata (Arthur’s girlfriend) let me ride her bike to a local market. The “store” was more like a warehouse, with boxes strewn about and poor organization.

After the picnic, the Crash organizers arranged for us to take a tram around the city, kind of like a party tram, but after the second lap, it got boring.  And there was no bathroom. After, the Crash organizers had us all going to another club after that, but our group wasn’t in the mood. Instead, we decided to have a quiet night of Bach, tea and conversation in Arthur and Ignus’ room. Jose, Marek and Agata were sharing card tricks, and then we all shared proverbs and jokes native to our respective countries.  Here are are few that I wrote down:

I didn’t write down the spelling, but the Lithuanian insult is: I hope you get a porcupine in your pants.

Today, the organizers had planned a tour of Krakow, during which I walked with Jose most of the way, which was nice because we both walk slowly. It was MOST informative, and quite beautiful.  We went by where John Paul would stay on his visits back to Krakow, and Monica, the CSer giving the tour, told a story about one of the last time he had been to town.

Across the street from this window, (behind this photo perspective) is a medium-size grassy knoll, and when he was in town, hundreds of the faithful gathered in the grassy knoll, singing and praying.  She said that he came to the window and chatted with them for a long while, and then told them he had to go to bed and said ‘Good night.’  After several moments, he came back to the window, where everyone was still outside.  He said to them, “What are you doing? It’s late and we have church in the morning. Go to bed!” I can’t imagine what that must have been like – how special.

We ate lunch and cruised down the Vistula River, and after that, sat in a group in the grass by the river and the castle and played games.  It was a lovely afternoon. 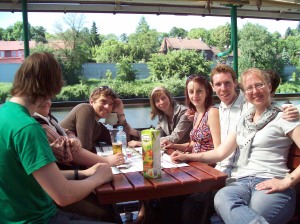 This was a rough day from jump. In the morning, I took off alone and got on a train that, unbeknownst to me, was ending. The driver yelled at me and as I was exiting the door she slammed her hand on it. Yuck.
I went out to Nova Huta (a “gift” from Stalin to show how fabulous a community society is) and I was warned not to go. I was curious, however, having been raised at a time that the Iron Curtain was desperately trying to remain hung and then vigorously torn down.

After I got off the train and started looking around, I took a picture, ready to document the day. I also glanced behind me to stay aware of my surroundings and noticed a man behind me.

Not a problem; a man behind me. I looked him full in the face, like I do when I’m on the street, just to let strangers know I see them. Just in case. I was not walking fast but walking like a mid-westerner (TM Arthur) and I took note that the the man didn’t pass, though he was still behind me. I made several turns, he followed.  Still behind me. I made my pace more brisk and cut across a yard to a park.  I went in and dug around my bag like the most normal thing in the world. He was half-turned, watching me.  After a few seconds, I looked back up, and he was fully facing me, staring.  I looked at him for a few seconds, and then started walking again, thinking, “Fuck. I don’t know the language…what do to.”  I approached several women to try to talk to them to ask for help and to look like I belonged, and when I looked for the man again, he was gone.

I wanted to keep wandering around, but that was not what my instincts were telling me. I had come close enough to trouble, so instead, I went to the mall, familiar surroundings with a free bathroom.

Today, I went to visit the old Jewish district of Krakow – Kazimierez. Quite beautiful.

If you have stayed with me this long, thank you! I hope you enjoyed walking through my memories of Krakow! It is a delightful city and I cannot urge you enough to visit. I can’t wait to go back. If you have any questions (or corrections! I may have gotten something wrong!) please comment below and I will answer you/rectify the error.