My first official stint as a real live acting Rennie approaches, and I’m sick.  I was out doing site work last Saturday, and fell sick.  In truth, I was already coming down with something, but then I didn’t hydrate properly. Bot now, just a few days out, I’m getting excited and watching Brave to prepare for me accent. As I think about the month that approaches, I realizes it will pass quickly.

So I blog about it.

One of the most fun things about this is the creation that has been going around in the Creo Somnium household for the past month.  Cohiba and I have been busy at work on different parts of our character – sewing garb, doing sword work, creating wooden dice. 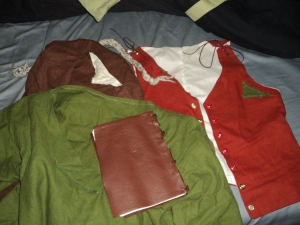 This is going to be my full garb most days.

This is the first time I’ve sewn clothes for myself, (not counting two ugly-as-sin skirts I made for myself in college and thought were the bees knees) and I’m pretty happy with the results. The brown is a skirt, and it has a drawstring of braided wool thread. I designed it on the fly. The green is a shirt and the red is a bodice. Both of which I made from a pattern I drew on the back of a grocery bag, and then made some adjustments as necessary.

Then, the brown rectangle on the green is a leather “book” I hand stitched together because my character is a story teller. I’ll also carry wooden knitting needles and balls of wool – I spin “yarns” of all kinds! 🙂

Here I’m sewing op the edges of my arisaid.

Cohiba made me a fork!

This is the fork being seasoned, if you will. Looks like something else, doesn’t it?

There is a LOT of work that needs to be done around the site and that’s been fun, too. Since I’ve seen the Scottish camp for several years now, I’ve had an idea of the potential of the site.  It’s gorgeous, green and cool, but it wasn’t as interesting as it could be.  For example, there was a circle of stones that *could* have had a little display or something pretty in there, but it didn’t.  Or, there was a garland over something that *could* have been so pretty where it hung, but it was old and slapdash.  This year, since I’m part of it, I’ve been able to describe a few of the possibilities I’ve seen, and I’ve been lucky enough to work for parts of my vision.  Pictures of THAT will be forthcoming.

The only downside is this: we live an hour from there. An hour.  It will take us two hours a DAY to get there and back. The cast used to be able to camp in the park, but that changed this year.  The organizers are trying to talk to hotels and get deals for us, and there is a camp site 30 minutes away from the Faire site.  We probably will camp at some point, but not this weekend.

Have you ever been to a ren fair before, dear reader?  If you have not, perhaps these posts will tempt you. I’m so excited I even made a new category: Renaissance Faires. Enjoy!