If we were having coffee, our greeting hug would be long. Its been about a month since we’ve seen each other, and had the holidays and a lot of life in that time.

We’re meeting in a different place-an almost quintessential Seattle coffeehouse, in an A-frame with fresh flowers peeking out of odd corners and colorful art of winter animals-and we’re torn with the desire to look around and take in the environment.

If we were having coffee, I would tell you that the trip home wasn’t as relaxing as I had hoped, and I’m happy to be back in my own place. Things were tense with my own family, and you raise an eyebrow to hear that. Your mother? you guess, and I happily tell you that she and I seem to be back on track right now.  No, its someone else, and it was just tense. There was even one time I was afraid some of the trouble would be directed at my Wee One, so my mama hackles were up. I just hate when people are dicks, I say. Why do people have to be fucking dicks? You laugh at me in sympathy.

There was also that flooding and snow in the Midwest, which jacked up my flights and added to the already stressful prospect of flying with the baby. When we were with Cohiba’s family, though, he and I got to go out alone a few times, and that was nice. But I’m glad to be home and back to my routine with the Wee One. I didn’t even realize that we were so much in a routine until we got out of it.

If we were having coffee, I would tell you I got together with couch surfers! I haven’t seen these guys in so long. One of them is living in London, another lives in Costa Rica, another is recently married and pregnant, another just got back from living in Colorado, and another is getting treated for testicular cancer. Life, you know? But I was looking around the table and reflecting on the stories and memories I have with them all. Going home is good for that.

A couple at the table next to us is playing a tabletop game and they shuffle their deck of cards for the 10th time. Her hair and makeup are really well done, and we wonder if its a date.

If we were having coffee, we would talk about our upcoming plans for the year.  Not quite resolutions, but having the holidays behind us gives us the chance to think about the future without getting overwhelmed by immediate requirements. I plan to play the Seattle tourist, I say, and mention that I already went to the Seattle Art Museum to see a special Impressionism exhibit. I took the Week One because I know how important these next few years are to her neural development. I want to give her the best chance I can. 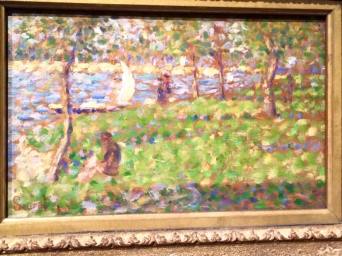 I’m planning to take her to a skiing lodge tomorrow.  I mean, Cohiba is going skiing with friends, and I’m going with them with the Wee One.  They just had a baby as well, and I’ll watch them both.  I have absolutely no desire to ski – Cohiba has tried! – but I want to see our friends and the mountains and, who knows? Maybe I’ll change my mind.

But I don’t think so.