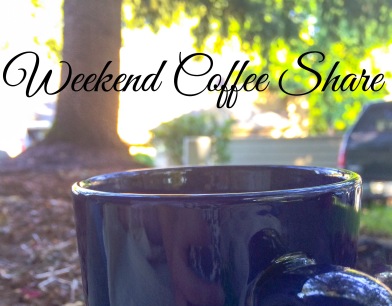 If we were having coffee, we would be here for a long time since its been awhile since we met! We had birthday parties, both in Ohio and in St. Louis. (Oh yeah, Wee One is two. What did you do that she has to be two? 🙂

The visit to St. Louis was so nice! WO, my mother, and I are all February babies, so we all celebrated together. I want to keep doing that. WO and I also met with our Ren Fair guild, so some of our best Rennie friends. I don’t know how much she has remembered them, but she’s seen them every year for two years and it was great.

But that meant I drove to STL alone with WO, and I’ll tell you about that tomorrow!

If we were having coffee, you would notice I still have my church clothes on, as I took Wee One to church this morning, a new church I’d only been to once before. Right now, as we’re in church, she likes to walk around. Only in the back, but she puts her finger on the brick walls and touches the stained glass windows. The service is weird, though, and…its different when you have a kid. A few people gave me looks like I spilled something on their carpet. I miss our Seattle church.

There was something really lovely I noticed, however, in the family in front of us, two parents and two boys. I talked with the younger (11 years old?) boy for a bit, and the older boy (14 years old?) helped with the service. The older boy was sandwiched between his parents and, for a time during the homily, he was leaning his head on his father’s shoulder, and his father was leaning his head on the boy’s. A teenage boy leaning his head on his father! Father had his arm around the boy on the pew and was loving on his wife’s shoulder at the same time. I generally got the impression that it is a very loving and supportive family, the kind I hope to create with Cohiba for Wee One.

If we were having coffee, I would tell you how I haven’t written much lately, even on my personal stories, because I have been wrapped up in a couple of Facebook groups that focus specifically on social justice for people of color. I get the sense that, if you will allow the expression, my glasses are wrong, like, the way I see everything needs to be changed. Tinted.

But I’m thinking about this quote by an indigenous Aboriginal activist Lilla Watson: “If you come here to help me, you’re wasting your time. If you come because your liberation is bound up with mine, then let us work together.”

If I’m honest, I’m not yet at the point where “your liberation is bound up with mine.” I mean, I am intellectually, but I mean spiritually and on a cellular level, I’m not there yet. So I’m reading and trying to absorb.