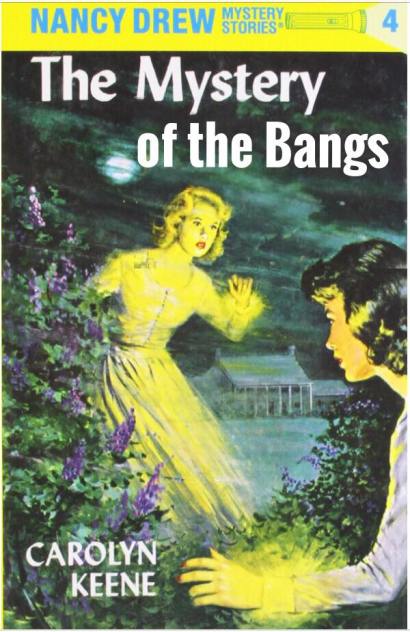 The Facebook post read, “By any chance, did anyone cut my daughter’s bangs?” And thus opens the one case I was never able to solve.

Because one day, I realized that my daughter wasn’t pushing her hair out of her face like she had been doing. (I’d been trying to grow out her bangs.) Instead, they were hanging cutely and evenly just above her eyebrows, and I distinctly remember them being longer. But when had they been cut? And who had done it?

I took to the Facebook Hive Mind for suggestions and a possible confession. I had several ‘suspects’ in mind,

‘Did she find some scissors?’

I don’t believe she did they’re not just laying around where she can get them. And even if she did, she’s not that good at cutting, and this is a clean and neat job.

Tell me about it.

”I don’t know about you, but anyone who cut my daughter’s hair without my knowledge or permission would be losing all supervised visits.’

‘Daycare didn’t do it, right?’

She’s not in day care. She was in a one-day-a-week program thing, and maybe they did it, but her last class was over a week ago.

‘I snooped in your photos and it looks like it her hair was long in the photos you posted four days ago.’

Hey! Great idea! (Look at my photo roll to see exactly if I can narrow down the day.) I think it was Thursday. What did we do that day??

‘My own daughter cut her bang when she was four. Did you find any hair remnants?’

No hair remnants, and she’s not that good at cutting. She still needs two hands to make a snip in paper.

‘Did grandparents do it?’

There’s just the one, and she says she didn’t (And actually, several people wrote me privately asking if it might be her. If it had been her, she would have told me. It wasn’t her.)

From someone close to us. I did wonder if she did it, but she would have told me.

‘Are you sure that it’s not just the baby hair layer cut short?’

Then I had an idea, a theory. Wee One is a hair twirler, and she had a knot in the front of her face. My mother-in-law had told me she cut it out after the fact, and I thought maybe the knot was so big is ended up cutting off her bangs.

Then it just got silly.

‘Maybe it as the second person on the grassy knoll.’

‘No, it was me.’ (From people living all over the country.

We still don’t know how her hair got cut.