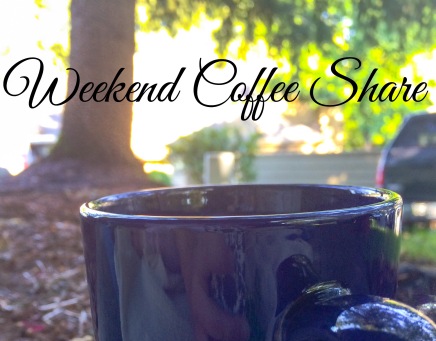 If we were having coffee, I wouldn’t be around for very long, and I wouldn’t be drinking coffee. I would be drinking tea and some sports drink to replenish some fluids I lost last week. I have had the stomach flu all last week, and now I feel like I’m coming down with something respiratory. I couldn’t even do my Top Ten Tuesday, I felt so icky! You groan in commiseration, because its no fun to be sick. I was also really homesick during that time, more than I usually am. I was hurting and didn’t know what was happening, and I wanted my mom to tell me I was okay. I know both my mom and mother in law wished they could be here to help, which is sweet.

I have still been able to nurse the Wee One, which I hope means I’ve given her some immunity from my illness, but other than that Cohiba has been a rock star with her so I can rest and heal. He even took day off work and worked from home the other days so let me rest more. I always thought “stomach flu” was just the flu with vomiting. Now I’ve learned.

If we were having coffee, I would talk about how the Wee One is growing. She often tells me what she wants, quite loudly, and most of what she wants isn’t food. The only thing I know for sure she will eat is anything from a recyclable pouch that I bought last fall. So I daily make her smoothies with different fruits and veggies. Easy peasy. It’s getting to the point that she’s excited to see the blender come out, ’cause she knows she’s going to get something good out of it. As promised, her personality is blossoming. She’s more mobile now, doing this crawl/scoot thing. She can get herself around the living room from toy to toy, and I love watching her. Then she scoots over to me and tries to grab my fingers, because what she wants most is to walk with mommy. She is so proud of herself when she does.

If we were having coffee, I would tell you about this wicked awesome dream I had yesterday afternoon. It had several layers and I’m going to use part of it in a story. You have done some dream interpretation and you talk about that a bit. I did a little of that as well when I was in undergrad. I was taking this course through the Newman Center, my campus church, and as part of it, we were encouraged to examine our dreams.

You make a face, because this is not something you normally hear associated with a catholic church. It was far out, I tell you. It was in a college town, a liberal hub in a very conservative state, and the church reflected that. But it really cultivated an environment in which people could best understand and experience God.

If we were having coffee, I would tell you about going to the town library and looking over several dream interpretation books – they all said different things! – but I think the trick was to find the one that seemed to carry the most weight and pertain the most to your life. Unfortunately, none of the interpreting, interesting though it was, led me to any valuable insight. At the time, most of my dreams consisted of me working for a goal and never quite getting there. I don’t have those kinds of dreams so much anymore, but now have dreams with interesting stories – thankfully.

A few times, I’ve had some intensely disturbing dreams about victimization and being held hostage. I haven’t been able to glean any insight from them, but I’m sure it’s there.